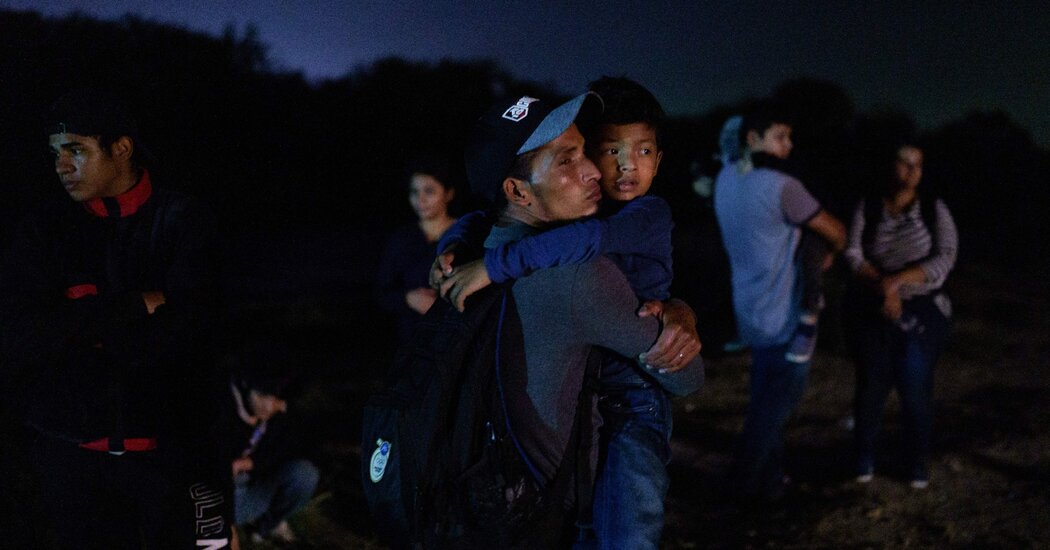 WASHINGTON — President Biden came under renewed pressure on immigration Friday as the authorities said the largest number of migrants in years arrived at the border with Mexico last month and a federal judge in Texas raised legal questions about an Obama-era program that protects young immigrants from deportation.

Border officials encountered migrants nearly 6,000 times a day last month for a total of 188,829, the largest monthly number in recent history, according to data released on Friday by Customs and Border Protection. The surge is happening at the height of the hottest summer months, when the flow of people seeking entry into the United States usually abates.

In Texas, Judge Andrew S. Hanen of the U.S. District Court in Houston ruled that the program known as Deferred Action for Childhood Arrivals was unlawful, raising new questions about the fate of nearly 600,000 immigrants, often referred to as Dreamers. But in a partial victory for Mr. Biden and immigration advocates, Judge Hanen stopped short of ordering the program terminated, saying the government could not approve new applications.

The ruling adds urgency to Democratic efforts to permanently legalize DACA recipients as part of Mr. Biden’s $3.5 trillion economic recovery bill being debated in Congress. Activists have already been pressing Mr. Biden to make sure that the Dreamers and other immigrants are given a path to citizenship in the bill, though the effort could be blocked by complicated procedural rules in the Senate.

Taken together, Friday’s developments underscored the difficult and often politically fraught choices that Mr. Biden is confronting on immigration, an issue that could shape his legacy and help define the moral center of his presidency.

In recent weeks, progressive Democrats have ratcheted up their pressure on Mr. Biden to end the use of a Trump-era public health rule that suspends asylum rights in the name of protecting Americans from the coronavirus, calling it an inhumane and unnecessary pandemic-era restriction.

But Republicans are ready to pounce the moment he does that, eager to portray Mr. Biden as an open-borders president who pays too little attention to the crime, health and economic consequences of his immigration policies.

So far, the public health rule — imposed last year by the Centers for Disease Control and Prevention using what is known as Title 42 authority — has given Mr. Biden’s administration additional time to prepare to deal with larger numbers of migrants in the future.

But activists say the surge at the border means that the administration is unfairly denying asylum rights to tens of thousands of migrants each month. Of the more than 1.3 million times border authorities encountered migrants since March 2020, officials have used the public health rule more than 973,000 times to deny them the chance to claim asylum, making exceptions primarily for children and some families.

Ending use of the rule might satisfy critics in Mr. Biden’s own party, but it could also lead to new scenes of crowded, unsafe Border Patrol stations and fuel conservative talking points before the midterm elections in 2022.

Either way, there are challenges.

If the president increases detention facilities to hold illegal border crossers for long periods of time, he risks accusations that he is embracing his predecessor’s anti-immigrant policies. If he allows tens of thousands of migrants to wait in the United States for their court hearings, he will be accused of allowing a “catch and release” policy with a pandemic still raging.

“They’re in a hard place,” said Representative Henry Cuellar, a Democrat from a border district in Texas. “Anytime you campaign, it’s a lot easier to say certain things. But once you’re in office and you see what’s happening,” reality sets in.

The grace period for Mr. Biden is quickly running out as more of the country is vaccinated and reopens. And pressure from the immigration activists who campaigned with him is mounting.

His administration is the target of several class-action lawsuits accusing officials of violating the rights of asylum seekers. The president’s liberal allies in Congress are increasingly impatient. And world leaders are speaking out. This summer, Filippo Grandi, the high commissioner for refugees at the United Nations, called on Mr. Biden to end the use of Title 42, saying it flatly violates the 1951 Refugee Convention and international refugee law.

“I appeal to the government of the United States to swiftly lift the public-health-related asylum restrictions that remain in effect at the border,” Mr. Grandi said, “and to restore access to asylum for the people whose lives depend on it, in line with international legal and human rights obligations.”

Earlier this year, when the president partially lifted the public health rule for migrant children who arrived alone at the southwest border, the government found itself woefully underprepared. Without enough shelters to hold the children, they stayed crammed in Border Patrol cells for days, sleeping on gym mats with foil sheets. The situation drew criticism from inside the country and around the world.

Senator Ted Cruz, Republican of Texas, introduced a bill last week that would block the White House from lifting the public health rule. And other Republicans have seized on the decision about the Title 42 restrictions to attack the president.

The attacks by Republicans are part of a broader effort by the party to use the border to gain an advantage in the midterm elections. Their message: Mr. Biden and Democrats have made Americans less safe by overturning Trump-era immigration rules. They have also blamed Mr. Biden for the increase in migrants trying to get into the country after he promised a more compassionate immigration system during the campaign.

“The Biden administration should not let political considerations get in the way of protecting the health of all Americans,” said Senator John Barrasso, a Republican physician from Wyoming.

But advocates for migrants say the Republican attacks are little more than hypocritical rhetoric from politicians who spent the last 18 months downplaying the severity of the pandemic. They are urging Mr. Biden to see the Title 42 measure, which many public health experts have said was unnecessary in the first place, as little more than a cynical effort by the former president to keep immigrants out of the United States.

For now, Mr. Biden is deferring to the C.D.C. to determine when the policy can be safely ended. Alejandro Mayorkas, the secretary of homeland security, said at a recent congressional hearing that the restrictions would stay in place until public health officials said otherwise.

Lawmakers, immigration advocates, nonprofits, and border and immigration officers have been left in the dark for months about a possible timeline for lifting the public health rule.

Mr. Cuellar said he had called the C.D.C. about it, and the agency told him he should call the Department of Homeland Security, which then sent him back to the C.D.C. He said he recently spoke with agents on the border, and they said they still had not heard anything about when the rule will be lifted.

“What that looks like, when that happens, we don’t know,” Chris T. Clem, the Yuma, Ariz., sector Border Patrol chief, said in early June. “But it’s not a day go by that we’re not talking about, ‘Hey, so what will we do here? What would we do there?’”

In June, border officials saw a spike in the number of migrant families arriving at the border, but only 14 percent were turned away under the public health order, because of exceptions and Mexico’s unwillingness to take migrants from certain countries back.

The number of migrant children and teenagers arriving at the border increased slightly from May, but the influx has slowed since early spring, when a steep surge created Mr. Biden’s first immigration crisis as president. On average, about 500 migrant children and teenagers arrived alone at the border in June, compared with about 600 a day in March.

The uptick in family arrivals in June still falls well short of the record set in May 2019, when 84,000 families came.

When it gets the go-ahead from the C.D.C., the administration is planning on lifting the health rule in stages, as early as the end of July, first allowing in migrant families.

But the real test for Mr. Biden will come when the rule is lifted not only for families, but for single adults who have been arriving in large numbers over the past few months.

The number of times that single adults tried to enter the country last month was down slightly; they were turned away under the public health rule 82 percent of the time.

Already in July, border officials are seeing around 6,300 migrants a day, according to internal numbers shared with The New York Times. Officials are also expecting an uptick in migrants from Haiti and Cuba because of the recent unrest in those countries.

“Even with Title 42, you have large numbers of people coming in,” Mr. Cuellar said. “So the Republicans certainly are going to turn this again to Democrats and say, ‘Look, there’s already high numbers, record numbers of people, coming in, and then you’re getting rid of Title 42, and you’re going to amplify what’s happening at the border.’”

Recently, officials from Immigration and Customs Enforcement are starting to be detailed to the border to help process migrants into the country, according to an official familiar with the plan. Bringing in more migrants creates a need for more space for them while they go through the initial steps, a process that can take two or more hours per person. More migrants also means there will need to be more translators, more coronavirus tests and more space for medical isolation, particularly with the spread of a stronger variant of the virus.

ICE plans to enroll the migrant families seeking asylum in tracking programs without having to detain them, which means buying more equipment, such as ankle monitors and smartphones loaded with applications so that they can check in with the government while they wait for their case to move through the clogged immigration system.

The fate of the immigrants known as Dreamers only complicates Mr. Biden’s choices.

The Biden administration is expected to appeal Friday’s ruling that suspended new applications, and unless Congress steps in with a legislative remedy, the ultimate legality of DACA is almost certain to be decided by the Supreme Court.

The ruling also represents a significant new challenge for Mr. Biden as he tries to build support in Congress for his plan to legalize up to 10 million other immigrants who are in the country without authorization.