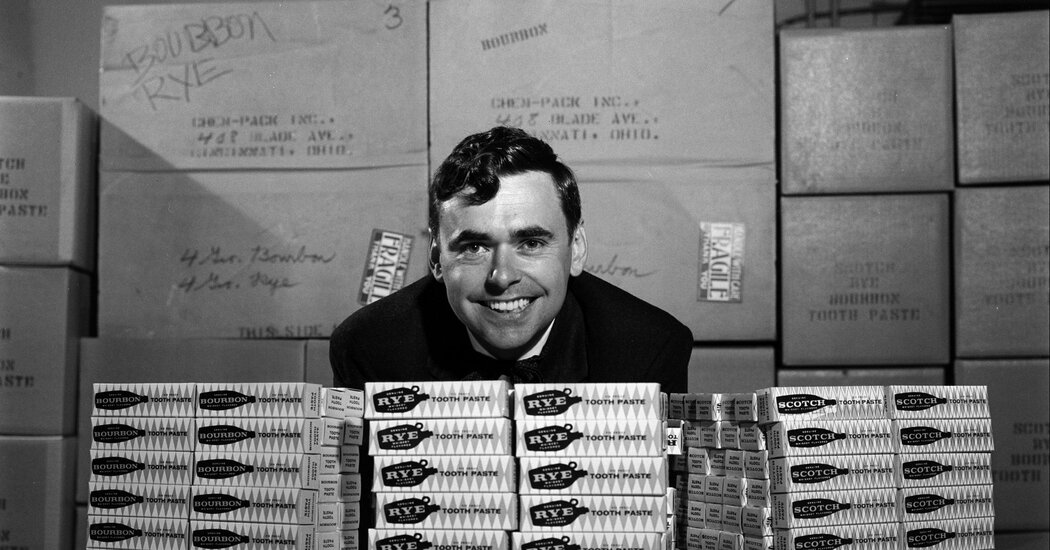 Some of Don Poynter’s creations, it must be admitted, had a certain whoopee cushion quality.

There was, for instance, the Talking Toilet, a chatty gizmo that could be concealed on a toilet; when someone sat down, a recorded voice would exclaim, “Move over, you’re blocking the light!” or something similar.

And there was the Go-Go Girl Drink Mixer, a skimpily dressed glass-holding doll that rotated her pelvis to stir a cocktail.

But if some of the countless novelty items Mr. Poynter invented and produced were on the lowbrow side, there is no denying the subtle brilliance of one of his earliest and most successful ones: the Little Black Box. Created in 1959, it was an unadorned box with a switch on top. Activate the switch and the box vibrated a bit; then a hand emerged from it and turned the switch off.

That was it: a device whose only purpose was to turn itself off. Other people in the same period had explored iterations of the so-called useless machine, but few saw the marketing possibilities as clearly as Mr. Poynter.

“Reps at a New York trade show kept asking what it did,” he told the alumni magazine of the University of Cincinnati, his alma mater, more than 40 years later. “I said, ‘It does absolutely nothing, except switch itself off.’ Everyone thought I was crazy, but I sold it to Spencer Gifts. In one month, it became the hottest item they ever had.”

Later, when the television show “The Addams Family” appeared in 1964 with a character known as Thing, who was just a hand, Mr. Poynter struck a deal to market a variation of the box under that name. Mr. Poynter said he sold 14 million of those. Over the years he accumulated so many patents, he lost count.

Mr. Poynter, who in a colorful life was also a drum major, an entertainer at Harlem Globetrotters games, a puppeteer and a golf course developer, died on Aug. 13 in Cincinnati. He was 96. His daughter Molly Poynter Maundrell said the cause was cancer.

Her father, she said in a phone interview, was lucid even in his final days, recounting stories to the hospice center staff so extraordinary that they prompted a phone call.

“I knew exactly what the social worker was going to ask me,” Ms. Maundrell said. “She said, ‘I was worried he was hallucinating.’ And I said: ‘They’re true. They’re all true.’”

Donald Byron Poynter was born on May 14, 1925, in Cincinnati. His mother, Gertrude (Johnson) Poynter, was an artist and homemaker, and his father, William, was an inventor and photographer.

Young Don showed an inventive streak early; Ms. Maundrell said he told stories of sneaking flash powder from his father’s photography supplies, making little bombs out of it and dropping them from remote-controlled airplanes.

“I started out trying to entertain myself,” he told Scripps Howard News Service in 1988. “Then I discovered it was fun entertaining other people, too.”

He first did that, though, not as an inventor but as a radio voice actor on WLW in Cincinnati (where young Doris Day was sometimes a castmate). He enrolled at the University of Cincinnati after graduating from Western Hills High School in Cincinnati in 1943, but the next year he joined the Army, serving until 1946 and sometimes entertaining fellow soldiers with a magic and ventriloquism show.

Returning to the university, he became the drum major, drawing press attention with his elaborate baton twirling, which he would sometimes do while walking a tightrope.

After he graduated in 1949 with a bachelor’s degree in business administration and marketing, the Harlem Globetrotters took notice of his twirling skills, and he spent several summers touring the world with the basketball troupe, providing pregame and halftime entertainment that included twirling flaming batons in a darkened arena.

“His whirling batons captured the British fancy,” The Cincinnati Enquirer wrote in 1950. The newspaper said he agreed to an endorsement deal with a British company that produced “the Don Poynter baton,” complete with an instruction book written by him.

When back home in Cincinnati in this period, he worked for Jon Arthur, who had a nationally broadcast children’s radio show, “Big Jon and Sparkie.” Mr. Poynter made a puppet version of the elflike Sparkie character that Mr. Arthur took on tour.

Poynter Products was founded in 1954. Mr. Poynter’s first big hit was whiskey-flavored toothpaste, which brought him enough notoriety that he was a contestant on the game show “What’s My Line?” Another big seller, introduced in 1957, was his Jayne Mansfield hot-water bottle, which Ms. Mansfield, a movie star in the blonde-bombshell era, agreed to pose for over the objection of her handlers.

“He deduced that a hot water bottle would sell exponentially more if it were fashioned in the likeness of someone worth cuddling,” Erik Liberman, an actor who is working on a book and documentary about Ms. Mansfield, said by email. “Jayne Mansfield fit the bill.”

Mr. Poynter spent a week in Hollywood with Ms. Mansfield making the sculpture used as a model for the bottle. “I could have done it in two days,” he told Cincinnati Public Radio in 2015, “but why rush?”

Though Mr. Poynter used factories overseas to produce some of his biggest sellers, he always made the initial version of an item himself. “He didn’t just have the idea and give it to someone else to engineer,” his son Don said by phone.

Another son, Tim, recalled that he and his three siblings would be pressed into service. His Saturdays, he said, were often spent at the library, where his father had sent him to look through directories for possible suppliers. “He would say, ‘Here is a list of companies that I need to find that have this kind of plastic or this kind of metal,’” Tim Poynter said.

Ms. Maundrell recalled the role played by her mother, Mona (Castellini) Poynter, in the creation of a line of fake medical specimens — toes, noses and such, sold in liquid-filled test tubes.

“God love my mother — he molded her ear,” she said. “He had to put the mold on her and put her head in the oven.”

Don Poynter noted that there was at least one reward for the children’s efforts. “We were great at show-and-tell in school,” he said.

Mr. Poynter’s other novelties included the Incredible Creeping Golf Ball, which had clawlike feet. When on the green, a golfer could substitute it for the real ball and it would walk toward the cup.

Another golf gizmo led Mr. Poynter to build golf courses, said Pat Green, who worked with him for decades. It was a hopper filled with golf balls, for use at a driving range; when a golfer hit one ball, the rubber tee would automatically dive down into the hopper and fetch another ball. Mr. Poynter opened the World of Golf in Florence, Ky., in the early 1970s just to showcase the device; it grew into the World of Sports complex.

Besides saving the golfer the trouble of bending down to tee up a fresh ball, Mr. Green said, the device had the effect of getting customers to hit a lot more balls.

“It was a huge moneymaker,” he said in a phone interview. “You could hit 100 balls in no time, and we were charging eight cents a ball.” (Similar automatic tee-up systems are used by some driving ranges, like the one at Chelsea Piers in Manhattan.)

Mr. Poynter opened other golf enterprises, including the Triple Crown Country Club in Union, Ky. Mr. Green mostly worked on Mr. Poynter’s golf projects, but he said that Mr. Poynter would run his ideas for inventions by him too.

To power the tiny cars he called Antmobiles, of course.

Mr. Poynter’s son Tim eventually took over Poynter Products and sold the business in 1992. Mr. Poynter’s wife died in 2007. In addition to his children Don, Tim and Molly, he is survived by another daughter, Amy Poynter Brewer; 10 grandchildren; and 11 great-grandchildren.

In the 1988 interview with Scripps Howard, Mr. Poynter mused about the device he wanted to invent for his own tombstone.

“When you walked up to it,” he said, “you’d activate an electronic voice. And it would say, ‘Come on down.’”