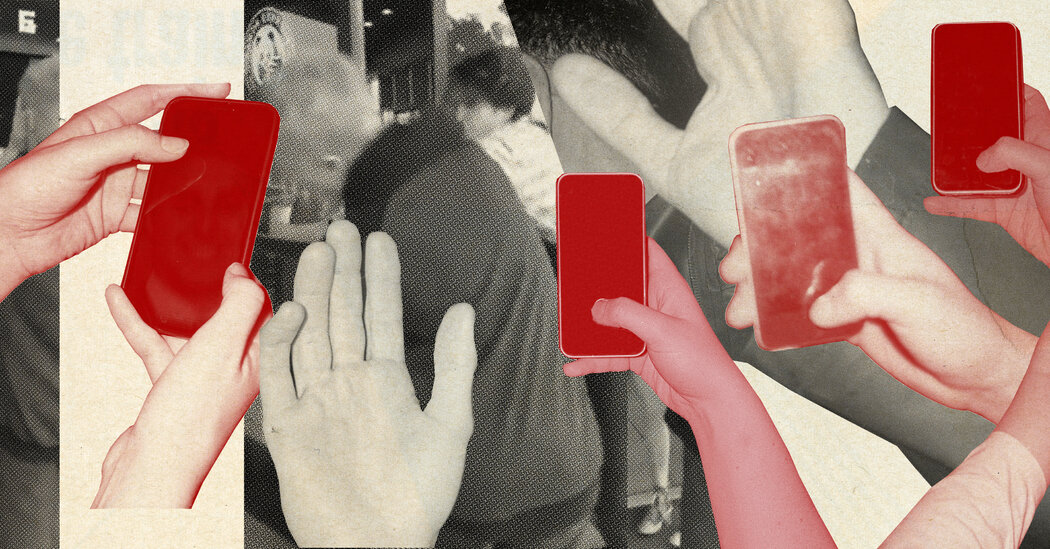 When I was a kid, one of my plans was to appear on some kind of candid video show. I was dimly aware of “Candid Camera” as a phenomenon of my parents’ or possibly my grandparents’ generation, but I fantasized about “America’s Funniest Home Videos,” or even just a spot on the local news. In addition to making me famous, this appearance would capture my insouciant charm. As an unusually self-conscious child — one who used the word “insouciant” a lot, if that gives you a sense of the problem — I hoped a candid video might show me as I really was: likable, quick-thinking, maybe possessed of some undiscovered athletic ability. The best part of this plan was that I could do nothing to advance it; by definition, I had to wait for the camera to discover me. I knew the odds of such a thing happening were astronomical. In the 1990s, people did not just roll up and shoot video of children on the street.

In the 2020s, these conditions no longer obtain. Thanks to smartphones and social media, people are constantly shooting video of one another, by accident and on purpose. The candid video has ceased to be a microgenre of television and has become a historical force. Whole news cycles turn on it. In some circumstances, it has the power to start riots and end careers, but mostly it has the power to annoy everyone. In the same way that the invention of the cellphone created the loud call in a restaurant, the smartphone has made public videography a mild but pervasive nuisance. We are still the protagonists of our own lives, but we are also now at risk of becoming supporting characters in other people’s Instagram stories. And this change has happened to all of us, whether we like it or not.

Our reams of fretting essays about how much the kids love phones tend to ignore who gave them phones in the first place.

Recently I saw eight seconds of video that capture this problem in its most extreme form. A boy and a girl, who appear to be of high school age, are walking into Panda Express when a third teenager with blond hair stops them in the doorway. He brings with him the energy of the hustler or the man-on-the-street interview host, and the couple are temporarily frozen, caught between suspicion and courtesy. It is a space where things could go either way. “Hey, hold on, excuse me — I have something really important to ask you,” the blond kid says to the girl. “The moment I saw you, my eyes were just — oh, my God, I love you, please could — bleagh!” The “bleagh” is the sound he makes when the other boy punches him in the face.

Several elements of this video are, well, striking. The boy who punches is wearing overalls and a yellow-striped shirt that eerily evoke one of the gang costumes in “The Warriors.” He seems to be a southpaw, and it looks as though he has thrown a punch before. But perhaps what is most remarkable is the distinct moment of resignation that he and his girlfriend share when they realize what the blond kid is doing. Around the time he gets to “my eyes,” she turns away and steps inside, while Overalls Kid calmly sets his smoothie on the ground in preparation to jack his interlocutor in the mouth. The sound of the impact is meaty. The video ends with both of them stumbling out of the frame, Blond Kid reeling and Overalls Kid winding up for another blow. It’s an efficiently cut bit of action that rewards repeat viewings, but it left me with one question: How do we feel about that punch?

I think we can agree that a punch would not be justified if Blond Kid were professing his love sincerely. But he isn’t. He’s professing his love while an unidentified fourth party records the whole thing, presumably as part of the “hit on another guy’s girlfriend” internet challenge. In this context, he is using other people as props, a bad behavior that society should discourage. But what are we willing to condone in order to discourage it? Our collective culture has just begun to decide how we feel about this kind of activity, which has been invented by new technology and will only become more prevalent in the future.

As a middle-aged man, I think of such technology as belonging to the kids, but it doesn’t. Smartphones, YouTube, TikTok and the like were brought to market by adults and then inflicted on a generation that has had little choice in the matter. Internet video belongs to Zoomers the way heroin belongs to junkies. Seen from this perspective, Overalls Kid is part of a history of violent resistance to foreign influence that Americans will recognize in everything from the Boston Tea Party to Al Qaeda to the Ewoks.

We are still the protagonists of our own lives, but we are also now at risk of becoming supporting characters in other people’s Instagram stories.

Our reams of fretting essays about how much the kids love phones tend to ignore who gave them phones in the first place. We are like parents who left the liquor cabinet unlocked and are shocked to come home and smell the children’s breath — except we’re making money, so maybe we are more like those 18th-century Britons who shipped opium to China. We aren’t forcing Zoomers to spend their childhoods watching and shooting videos; we’re just giving them the opportunity. Some kids will resist, but most will indulge that opportunity, and those who do will make a little more money for Google, for Apple, for TikTok — all the far-off companies chartered to do business with the digital natives in their new world. It is a world we call barbarous, even as we devote more and more resources to colonizing it.

Overalls Kid has seen his people (teenagers with disposable income) overrun by a foreign culture (adult technology workers) that exploits them for economic gain. And his only recourse against this exploitation is violence. Maybe he also spends his free time making prank videos, but I like to think he is desperately trying to live a normal teenage life: dressing weird, having a girlfriend, going to Panda Express even though they have already gotten smoothies because he wants to spend as much time as possible gazing at her. You know — kid stuff. And then along comes this blond kid with his videographer, and they proceed to treat his girlfriend as though she were just another girlfriend with just another guy — as the internet has taught them to do — and the blond kid even makes that hands-down-the-face Edvard Munch expression that you only see in videos, and it is all just too much. Overalls Kid hits the off switch on him.

Ironically, this act of protest against the colonization of his childhood goes viral on the internet. His refusal to be a character in a video gets millions of views, cementing his identity as a character in a video. Because you can’t escape it — the adults are so much more powerful, with billions of dollars and an army of people whose full-time job is to figure out new things for kids to do with their phones, until phones are all kid culture is. Smile! You’re on candid camera, for the rest of your life.

Dan Brooks writes essays, fiction and commentary from Montana and abroad. He last wrote an article about “Garfield” variants.