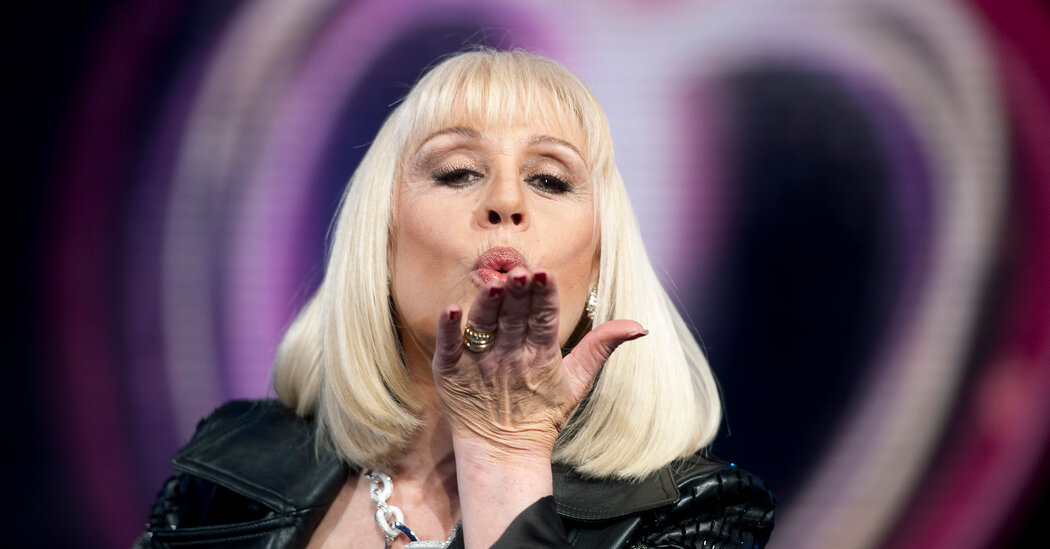 ROME — Some people stood quietly, some bowed, some made the sign of the cross. Others stretched their arms over a fragrant jungle of bouquets — mostly in yellow, her favorite color — so that they could caress the coffin. The floral tribute grew bigger by the hour as hundreds of fans endured Thursday’s blistering heat to pay their respects to Raffaella Carrà, the beloved television star who died on Monday.

“Everyone loved Raffaella,” said Leonora Mingaio, an educator, her voice breaking, shortly after visiting the vast ceremonial room in Rome’s City Hall where Ms. Carrà, 78, was lying in state, a ceremonial guard in attendance. “She deserves to be honored,” she said.

The outpouring of affection for Ms. Carrà after her death from what her family said was a long illness has few precedents in Italy.

“Italians spent so many years in her company, she was like a relative, someone you’re always pleased to see,” said Mirella Cappa, a civil servant who had come with a couple of friends to City Hall. She was a simple woman, added a colleague, Renata Calenda, “never a diva.”

Over a six-decade career, Ms. Carrà glued generations of Italians to their television screens, and her songs — she sold more than 60 million records — provided a soundtrack for their lives. She broke boundaries that commentators this week said had redefined Italian notions of public morality and challenged chauvinistic beliefs about the role of women in society.

In the early 1970s, while women were taking to the streets to protest their subordinate role in society and seeking the right of self-determination over their bodies and lives, Ms. Carrà was doing her bit for the revolution from a television studio that beamed onto the national broadcaster RAI.

She showed her bellybutton in 1970, a scandal at the time, opening a public debate about propriety on television. In 1971, she performed the song “Tuca Tuca,” teasingly singing “I like you,” as she touched her dance partner’s body, a bit quickly censored from TV. She never married but openly lived with her companions at a time when the Roman Catholic Church condemned such behavior.

She later revolutionized daytime television with a lunchtime program that broke records, and her variety shows included interviews with an assortment of celebrities and newsmakers like Mother Teresa and Henry Kissinger.

By Thursday, many hundreds of fans had come to pay their respect. Others had applauded along the streets on Wednesday, when a hearse with her coffin made its way from the singer’s home in an elegant apartment complex in Rome to City Hall, making stops in front of several RAI studios where Ms. Carrà had worked. The procession was broadcast live on RAI’s flagship station.

Her funeral, which is scheduled for Friday at one of Rome’s most storied churches, Santa Maria in Aracoeli, will also be broadcast live.

“When she died, it really touched me. She had been very close to the L.G.B.T. community,” said Christian Principessa, a hairdresser, explaining why he’d felt compelled to pay his respects. Ms. Carrà’s songs often referred to being free to love whomever one wanted (and the freedom to leave men who cheated). “She was close to us,” he said.

Ms. Carrà had also worked for many years on Spanish television and was beloved in the country as well as among Latin American audiences. Her death made front page headlines in many Spanish papers.

On Thursday, Ion de la Riva, cultural councilor of the Spanish Embassy in Italy, was among those who paid homage. Ms. Carrà and her boundless energy had been a splash of color during the gray days of the Franco regime, which she opposed, he said.

“It made a hell of a lot of difference to us, dancing to her songs,” Mr. de la Riva added. And she spurred other artists to follow suit “and be bolder and more forthcoming,” he said. “She showed people a way to be free of oppression.”

American audiences might best know her for her role in the 1965 World War II adventure film, Von Ryan’s Express, alongside Frank Sinatra.

In 1986, David Letterman introduced her on his show as the host of Italy’s “most popular show” someone who was “often called the Johnny Carson and Ed Sullivan of Italy.” She told Mr. Letterman that as a woman she preferred to be compared to Ann-Margret and Barbara Walters. “But I am only Raffaella Carrà,” she told him.

Her own shows drew big-name entertainers and over the years she sang duets with stars like Ginger Rogers, Sammy Davis Jr., Tom Jones, Joe Cocker and Donna Summer to name a few.

More recently, a 2011 remix of her 1976 song “A far l’amore comincia tu” by the French D.J. Bob Sinclar put Ms. Carrà back on the charts. The song provided the soundtrack to a boisterous party scene in Paolo Sorrentino’s “The Great Beauty,” which won the Oscar for best foreign film in 2014.

“The music guided that scene, had she not given us the rights, the scene would have been something else,” said Mr. Sorrentino, who described the song as “fun-loving” and “able to transport people into a vortex of joy,” which was a characteristic of Ms. Carra’s music, he said. “It’s about being carefree — there’s a joyous and familiar sensuality,” he added.

Younger generations came to know and appreciate Ms. Carrà, who was a coach on the Italian version of the talent show “The Voice.” “We knew her through our parents, but then came to know her positivity, her laugh,” said Riccardo Cicciotti, a 20-year-old university student.

Ms. Carrà’s death surprised the nation. Visitors filled three memorial books outside the viewing room with heartfelt, heart-wrenching messages, mostly expressing gratitude for having been such a part of some many lives.

“I spent my entire life alongside you,” wrote one of them, Alex, “you’ll be forever in my heart.”