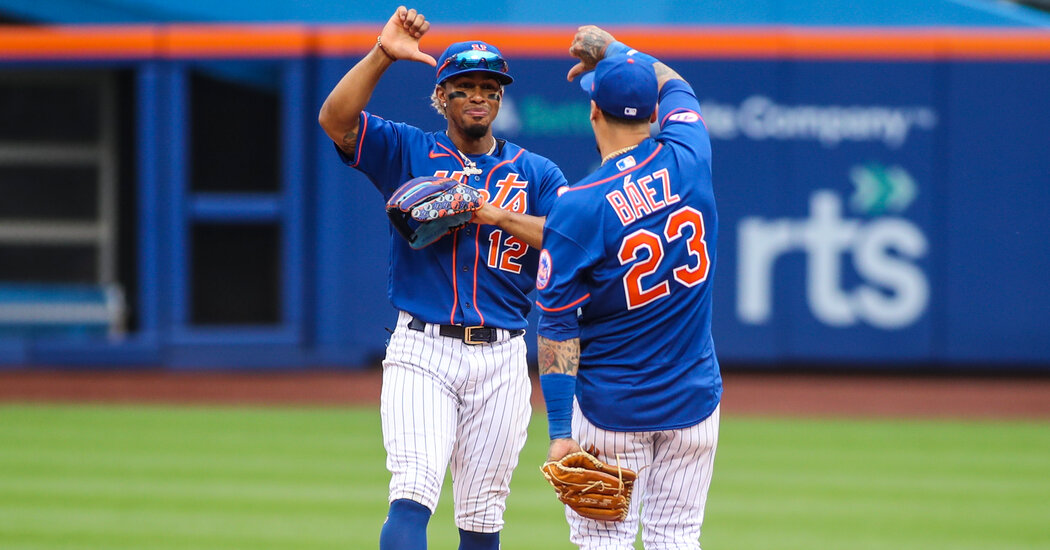 The funniest thing about the Mets is the players’ pious self-image. Over and over, they emphasize that they’re all about positivity — and if you doubt them or point out a flaw, you’re a hater. They seem to believe they’re entitled to praise, no matter their performance.

“Mets fans: Believe in us, and don’t just believe, know,” Pete Alonso said after the Mets fell out of first place three weeks ago. “Just smile and know that we got this.”

Mostly the fans play along; they want to believe in Alonso and his talented teammates. But now it has gotten personal, and with an aggrieved attitude infecting this Mets roster, it was all but inevitable.

On Sunday, the Mets scored a 9-4 win over a sickly Washington Nationals team gutted by trades. It gave them a series victory after a 2-11 stretch against the Los Angeles Dodgers and the San Francisco Giants that exposed them as pretenders. They are about to miss the playoffs for the fifth consecutive season.

But beating the Nationals made the Mets feel proud of themselves. They got so cocky, in fact, that some of the players, including Javier Baez, Francisco Lindor and Kevin Pillar, decided to teach those mean fans a lesson by flashing thumbs-down gestures to the customers at Citi Field.

What did it mean? Here is how Baez explained it in his virtual news conference after the game:

“Because if we win together, then we’ve got to lose together and the fans are a really big part of it. In my case, they got to be better. I play for the fans and I love the fans, but if they’re going to do that, they’re just putting more pressure on the team and that’s not what we want.”

Was that a thumbs down to fans, then?

Baez then reiterated that he loves the fans, but added, “We can’t have our fans against us.”

On a couple of points, Baez was right: It is very hard to hit, as he knows. Of the 110 major leaguers with at least 600 plate appearances over the last two seasons, through Saturday, he ranked 109th in on-base percentage, at .269. And the players are not, in fact, machines.

But neither are the fans. They boo because they want to cheer, and because they expect better. Is it counterproductive, as Baez suggested? Sure. Do the fans (or the news media, for that matter) truly understand how hard it is to succeed in the majors? Surely not.

But major leaguers, especially in demanding markets like New York, have to take it as an implicit part of the deal. Major league tickets are expensive, and major league salaries are generous. When a team holds first place for almost three months and suddenly finds itself 63-67, as the Mets are, it should expect occasional boos.

“Mets fans, New York fans, this market, this city knows baseball probably more than any other city,” Manager Luis Rojas said. “They have the right to react however they want. And we’ve got to understand where they’re coming from.”

Lindor, in particular, seems not to understand. He was adored in Cleveland, where he was a four-time All-Star known as Mr. Smile and led his team to the World Series. To stay in Cleveland would have required a contract extension below his market value. That wasn’t happening, so Lindor was traded to New York in January for four players, including shortstop Amed Rosario.

The fans were booing Lindor before April was even over, and while he said he understood, he also called it “interesting,” and noted that he was never booed in Cleveland. A week or so later, after an argument with his teammate Jeff McNeil in a dugout tunnel, Lindor crafted a bizarre tale about a rat, or perhaps a raccoon, that had gotten their attention.

He could have easily — and understandably — brushed aside the question; Derek Jeter made it an art form to politely deflect questions he did not want to answer, as if fouling off pitches to get one he could handle. But when Lindor chose an obvious misdirection play, even as an attempt at humor, it was an early sign that perhaps he was misreading his new environment.

Effectively booing the fans on Sunday, as articulated by his friend Baez, only confirms it.

Sandy Alderson, the Mets’ president, scrambled to control the damage Sunday night, issuing a statement referring to Baez and saying “any gestures by him or other players with a similar intent are totally unacceptable and will not be tolerated.”

Alderson added: “Mets fans are understandably frustrated over the team’s recent performance. The players and the organization are equally frustrated, but fans at Citi Field have every right to express their own disappointment. Booing is every fan’s right. The Mets will not tolerate any player gesture that is unprofessional in its meaning or is directed in a negative way toward our fans. I will be meeting with our players and staff to convey this message directly.”

Lindor has a full decade to absorb that message and apply the other lessons he is learning now. Baez — an ill-conceived rental from the Chicago Cubs in a trade for a top prospect, outfielder Pete Crow-Armstrong — will be a free agent this fall, as will Pillar.

Pillar (who is hitting .212) downplayed the matter on Twitter, claiming that the team was not booing the fans and was simply having fun. He also profanely responded to a user who chastised him for not respecting the fans, adding the hashtag #poopootake — a favorite phrase of pitcher Marcus Stroman, who sells caps with the slogan for $35 on his apparel company’s website.

Stroman retweeted Pillar. Then pitcher Taijuan Walker retweeted Stroman’s reply to Pillar, in which Stroman — wait for it — blamed the whole thing on the news media. Nobody used the forum to apologize, even for a misunderstanding.

It must be exhausting to be as sensitive as the Mets’ players seem to be. Cohen, for one, all but sighed on his feed. He has found that spending nearly $200 million on a baseball roster does not guarantee a title, a winning record, or even a relaxing Sunday night after a win.

“I miss the days when the biggest controversy was the black jerseys,” he wrote.