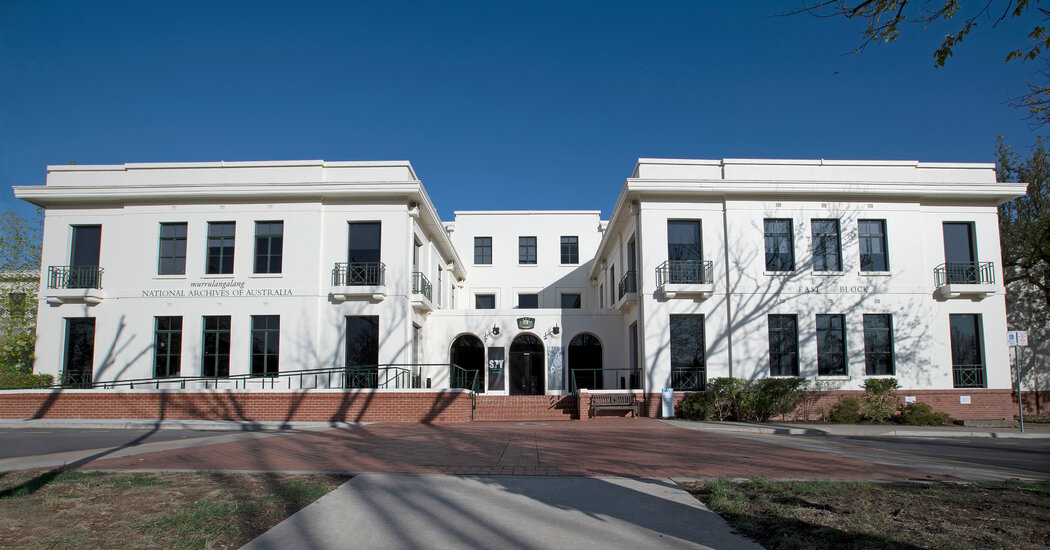 The Australia Letter is a weekly newsletter from our Australia bureau. Sign up to get it by email.

“We are in a race to preserve and digitize precious Australian records before they’re lost forever — and we need your help,” Australia’s pre-eminent repository of government records declared on its website and on social media. “Donate now.”

For the first time, the National Archives is asking for public donations as it tries to keep tens of thousands of records from disintegrating. After what experts describe as decades of funding cuts, the last straw seemed to come last month, when the Archives was given an increase of just $700,000 in the federal budget. That was a drop in the bucket compared to the $67 million it says it needs to digitize its rapidly deteriorating audiovisual collection by 2025, when much of the equipment used for playback may likely fail.

The spectacle of an institution that, in its own words, “safeguards the nation’s memory” resorting to crowdfunding has been labeled a “national disgrace” and an “international embarrassment” by historians.

There seems to be something deep in Australia’s cultural DNA — or at least in its political class — that makes it hard to value preserving and exploring the country’s past. Or at least certain parts of it — much has been said about how the National War Memorial, in contrast, has been granted $500 million for renovation.

Even Prince Charles has been drawn into the matter, after a prominent British historian wrote to his office to alert him that records related to the mutiny on the Bounty were disintegrating. (Prince Charles has made no public comment on the matter.)

Also at risk, according to the Archives, are tape recordings of prime ministers’ wartime speeches, recordings that document Indigenous languages and ceremonies, and Australian Security Intelligence Organization footage from years of surveillance of trade unions and leftist groups.

The Archives has had its fair share of controversies, including a protracted and expensive legal battle to keep secret the “Palace Papers,” which contained information about Gough Whitlam’s 1975 dismissal by the then-governor-general, and historians’ complaints that it sometimes takes up to a decade to gain access to documents.

The assistant minister in charge of the archives, Amanda Stoker, has defended the decision not to allocate extra funding, saying that the government was at a point where it needed to decide whether to maintain the current record-keeping system or invest in a new, more cost-efficient method. She said that “when that is done we will all be pleased that we put the money into the new system.”

“Time marches on, and all sources degrade over time,” Ms. Stoker said at a recent Senate hearing.

But the Archives’ director general, David Fricker, said that when we lose records of the government, we damage the integrity of its processes and the trust that people place in their leaders.

“If governments know and government officials know that they will be held to account because these records will be made available one day, it just gives us that little bit of incentive to make sure that we are acting with propriety and we are acting in the best interest of the public,” he said in a radio interview.

So much of what we see of politics now is focused on the day-to-day trading of insults on the floor of Parliament, said Nicholas Brown, a history professor at Australia National University. To build a more nuanced and long-term understanding of politics, including the work and decision-making that happen behind the scenes, historical records like those contained in the archives are vital, he said.

It’s not just records of government that are at risk, notes Michelle Arrow, an associate professor of modern history at Macquarie University. Also in jeopardy are records of ordinary Australian lives that just happened to brush against government institutions.

Another issue is that we don’t know exactly what’s in the archives. If records continue to deteriorate, “we won’t know what we’ll lose until a researcher tries to find them in 20 years’ time and discovers they’ve degraded,” Professor Arrow said.

What do you think about the state of Australia’s record-keeping? Write to us at nytaustralia@nytimes.com.

Now for this week’s stories: