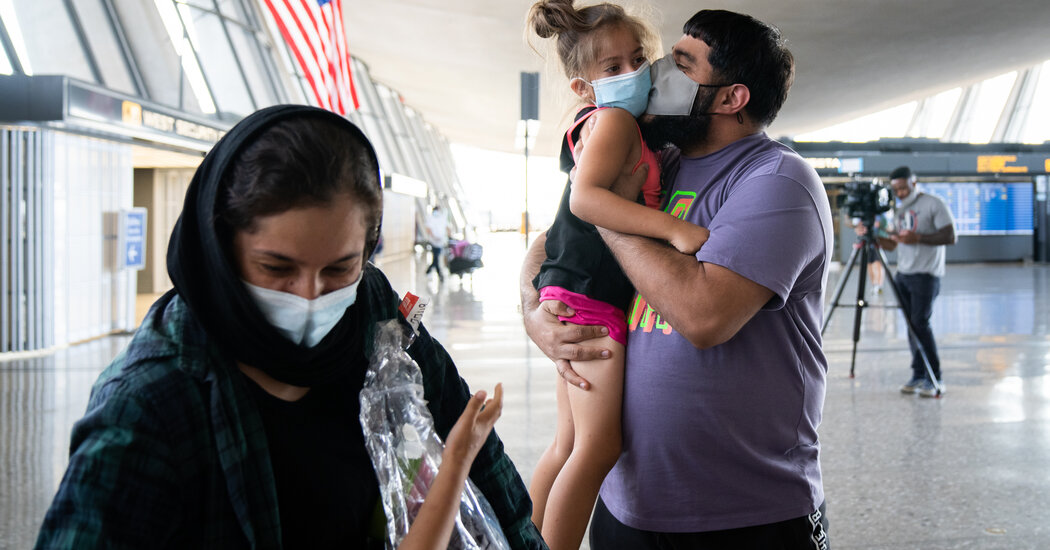 WASHINGTON — Consumed with trying to help dozens of Afghans escape their country as U.S. troops prepared to withdraw, aides to Representative Michael Waltz, Republican of Florida, shifted their work schedules, coming in after midnight so they could talk evacuees through Taliban checkpoints.

Senator Jon Ossoff, Democrat of Georgia, called a former military officer working for a private company as part of a frantic effort to try to extract two orphans lost in a crowd at Hamid Karzai International Airport in Kabul.

Flooded with thousands of urgent requests from Americans and Afghans in the weeks since Kabul fell to the Taliban, dozens of members of Congress have become deeply involved in helping to arrange evacuations.

According to interviews with a dozen lawmakers and aides who participated, they have spent sleepless nights fielding panicked calls, navigated what they described as infuriating bureaucratic hurdles and braced for the agony of informing families that there was little chance that they would be rescued.

The stories, from both Democrats and Republicans, help explain the intensity of the bipartisan anger at the Biden administration for the way in which it planned for evacuations and its insistence on holding to the president’s Aug. 31 withdrawal date.

More than 123,000 people, most of them Afghans, have been evacuated since the Taliban seized Kabul on Aug. 15, administration officials said. But thousands more will be left behind. The last U.S. military plane left Afghanistan on Monday, formally bringing an end to America’s longest war.

Members of Congress were so aggressive in trying to secure the rescue of stranded Afghans that they “overwhelmed” the American task force in Kabul orchestrating high-priority evacuations, said Representative Seth Moulton, Democrat of Massachusetts, who traveled to Afghanistan on a secret trip last week.

But in many cases, lawmakers gave up on the administration-led operation weeks ago, turning instead to their own connections to foreign officials, private organizations and individuals navigating private charter flights in and out of Afghanistan.

Concerned donors have given millions to an effort, called Operation Flyaway and led by the firm Raven Advisory, to assist with evacuations, compiling a list of more than 4,000 Afghans whom Americans were seeking to help. Veterans’ groups have sprung into action in volunteer efforts to organize what many call a digital Dunkirk. Some have taken it upon themselves to try to rescue Afghans they know personally from their time overseas.

Together with congressional offices, an informal support network has arisen to fill the gaps.

“It’s inspiring,” said Mr. Waltz, a former Green Beret who served in Afghanistan. “But at the same time, I think it’s a real testament to how badly the administration has dropped the ball.”

The frustration is bipartisan. When Representative Andy Kim, Democrat of New Jersey, sat down with a top State Department official over the weekend, he hoped it could provide the American family he was working to evacuate from Afghanistan with a lifeline.

Mr. Kim entered the meeting with a simple request: What was the best phone number the family could call for help?

“I was told no such number exists,” he wrote on Twitter.

In an interview, Mr. Kim, who served in Afghanistan as an Army strategic adviser, said his office had received more than 6,000 requests for help, many of them spearheaded by veterans or national security officers trying to assist their former colleagues in Afghanistan. The requests came in, he said, through “texts, WhatsApp, Signal, email, phone calls — just literally around the clock.”

“I tell them that I can make no promises here, but they feel what I feel, which is we have to try and not just sit on our hands,” Mr. Kim said.

Despite their best efforts, though, congressional staff members have often found their hands tied. One aide described the anguish of having to tell multiple Afghans that while they were eligible to leave the country, their children were not. The hardest part, another aide said, were the phone calls in which constituents broke down on the line, worried about their trapped families. Others said they had spent recent days crying at their desks out of frustration and anger.

“One friend of mine said, ‘Look, my Afghan ally and his family, including a 2-year-old, made it into the airport, and then were escorted out,’” said Representative Veronica Escobar, Democrat of Texas. “We’re trying to find out why. But the incredible desperation and heartbreak is overwhelming.”

Even the success stories are tinged with pain. In the early days of evacuation, Representative Ro Khanna, Democrat of California, was able to help Sultan Mansoor, an Afghan translator who lived in his district and had become stranded in Kabul on a trip to visit family. Mr. Sultan and his extended family had received instructions to arrive at the airport, only to be turned away by U.S. soldiers.

“We were scheduled to get in the air, but somehow we couldn’t,” Mr. Sultan said in an interview. “It was very difficult for them, I think, but they picked people randomly.”

The next day, Mr. Sultan and his family got through the airport gates — but not before the Taliban beat him, his father and his brother.

Who are the Taliban leaders? These are the top leaders of the Taliban, men who have spent years on the run, in hiding, in jail and dodging American drones. Little is known about them or how they plan to govern, including whether they will be as tolerant as they claim to be.

What happens to the women of Afghanistan? The last time the Taliban were in power, they barred women and girls from taking most jobs or going to school. Afghan women have made many gains since the Taliban were toppled, but now they fear that ground may be lost. Taliban officials are trying to reassure women that things will be different, but there are signs that, at least in some areas, they have begun to reimpose the old order.

Ms. Slotkin, a former C.I.A. analyst and national security official, used her connections for a nearly two-week effort in which she and her staff worked with what she called a “ragtag network of people around the world” to help with the evacuation of more than 100 Afghans to Albania.

On Twitter, she thanked the former national security adviser H.R. McMaster and his “networks of current and former military who helped this group onto buses and safely enter the airport after 23 hours of anxious waiting outside the gates.” She also named two nongovernmental organizations — Vital Voices Global Partnership and Spirit of America — that had received the Afghans at the airport in Tirana, Albania, and were helping them get settled.

Representative Richard Hudson, a Republican whose North Carolina district includes Fort Bragg, has been inundated with more than 700 requests from his constituents to help Afghans. He sent about 200 of them to Operation Flyaway to try to help.

“We have worked closely with organizations including Raven Advisory, providing some limited assistance and logistical support,” Mr. Hudson said in a statement. “We have also provided them a list of S.I.V.s that I am actively working to get out of Afghanistan,” he added, referring to Special Immigrant Visas, meant for people who assisted U.S. military and diplomatic missions abroad.

Raven Advisory’s operation has more than 30 volunteers — including 25 military veterans — who have so far assisted 350 people in their flights from Afghanistan, including helping to fund an airlift with Sayara International and the Rockefeller Foundation of more than 50 people to Uganda.

The operation has four more charter planes booked, and it is exploring other methods of leaving Afghanistan.

Among those already evacuated are a female Afghan pilot and her family; a critically injured woman and her family; four interpreters and their families; and two orphans with a relative in the United States.

“We received a frantic call about two orphans whose parents had been killed by the Taliban, and their uncle lives in Georgia,” said Sheffield F. Ford III, the chief executive of Raven Advisory and an Army veteran who earned a Silver Star in Afghanistan. “Senator Jon Ossoff called and asked if there was anything we could do to help. We called all our different contacts in the military, from special operations to conventional forces to the Marines. It was incredible how they helped us, and we found the two kids. We were able to get them onto a plane.”

Mr. Ossoff’s office declined to comment on his involvement.

As they announced that the final U.S. military plane had left Afghanistan on Monday, Pentagon officials conceded that many people were likely to be left behind.

“We did not get out everybody we wanted to get out,” Gen. Kenneth F. McKenzie Jr., the head of U.S. Central Command, told reporters. He said the United States would work hard through diplomatic channels to help Afghans who had worked with U.S. forces.

“The military phase is over,” he said, “but our desire to bring these people out remains as intense as it was before.”

At the Capitol, Mr. Waltz pledged to continue evacuation efforts. He had just finished a call with an American family outside the gates of the airport in Kabul, he said, and delivered the bad news: It was closed.

“We are now trying to smuggle them out through other means,” Mr. Waltz said, adding later: “We are going to step up.”